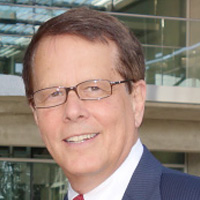 B. Chandler May is a clinical scientist in private practice in Santa Barbara, California. His hospital / clinic practice encompasses more than thirty-five years of experience in General Otolaryngology with an emphasis on respiratory medicine, infectious disease and trauma.

Dr. May began his education with a Master’s Degree in Electrical/Mechanical Engineering from Southern Methodist University in Dallas, Texas. Six years of engineering were followed by a year of graduate biochemistry, during which time he was also a significant software contributor to the development of a laser guided missile system for the military. His education continued with a medical degree from The University of Texas Health Science Center at Houston followed by a diverse residency: (1) a Pediatric Internship at Children’s Hospital Los Angeles, (2) a year of General Surgery at Kaiser Permanente Medical Center, San Francisco, California, and (3) three years of Otolaryngology at the University of Pittsburgh Medical Center, Eye and Ear Institute, and Children’s Hospital of Pittsburgh. Children’s Hospital Los Angeles and UPMC have been consistently in the top five residency programs in the United States in their respective areas of medicine. Additional formal education includes a Doctor of Jurisprudence degree from the Santa Barbara College of Law.

Dr. May is the immediate past of Chairman of Otolaryngology, Head & Neck Surgery, and Oral and Maxillofacial Surgery at Cottage Health, Santa Barbara, CA. He is a Fellow of the American Academy of Otolaryngology, Head and Neck Surgery, Fellow of the American Academy of Otolaryngic Allergy, Council member of the American College of Legal Medicine, and member of the California State Bar. He is both a Qualified and Agreed Medical Evaluator for the California Workers’ Compensation system. As a recognized international speaker, he has delivered more than 200 lectures to health-care audiences over the past twenty years. The past ten years have been increasingly involved in the research and development of the combination of levocetirizine and montelukast to treat a myriad of inflammatory disease conditions. Dr. May has authored original science in eight different medical disciplines. He presently holds 67 issued patents across 15 countries.